During one of my usual walks outside, I though about what the next subject for my next drawing would be and I realized that I had hit a “block,” so to speak. So I decided to pull out my phone and photograph a quick picture of what I thought was visually appealing enough to capture in another drawing. After reading a Bella Grace magazine and walking around some more, a small bundle of leaves caught my attention and I snapped away.

This bundle was the subject of my latest artwork. It took a couple of days to sketch the outline of the leaves and branch/stem, finalize the shape, and shade in the details on each leaf depending on how much sunlight was hitting them based on my reference photo. I even worked on it while sitting in my car one night and in the park during the middle of one weekday! 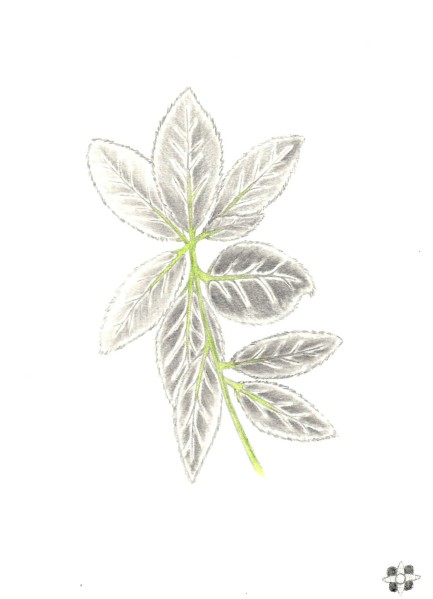 For forming the shape of my subject, I used a sharpened 5H pencil since I haven’t used it in a while and I wanted to see how well it would do. It worked out well!

For shading in the leaves and other detail, my B and 2B pencils were used. Some leaves were easy to shade in while others were a bit tricky.

The drawing turned out great in terms of detail, but I think I should have made it a graphite pencil piece entirely. I believe it would have turned out much better if the stem/branch was dark, then the leaves could stand out. I don’t know; maybe it’s just me and my preferences.

I'm a unique flower growing in a complex world through art and photography.

An aging tree with an intriguing pattern on the trunk...
Getting back into the flow of film developing after a very rough period. 🎞️
Title: Blooming Tulip
Thursday #workinprogressart 🎨
Keep trusting the process... ✍️ 🎨
Testing out my new wide angle lens while hunting for beautiful things...🌲
Join 160 other subscribers